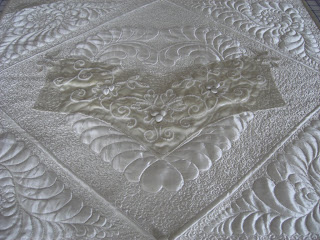 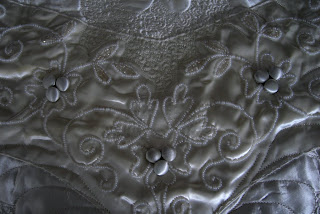 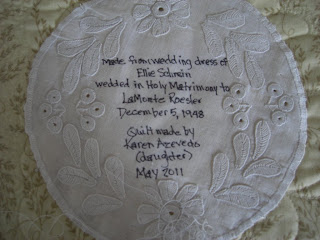 I have featured Karen Azevedo's work several times in the past as she is an amazing Linen Lady. She is a long arm quilter and does beautiful quilting on both "normal" and linen wholecloth quilts. She just forwarded her latest masterpiece and I just had to share with you...this is her story that accompanied the pictures:

"When Vickie and I were in Lincoln at the symposium my mom sent her wedding dress home with me. She said I could do "whatever" with it. So I decided for lack of another idea for Mother's Day that I'd do something with it and send it back to her. The only beaded part of the dress was the bodice that was under the breast area and above the waist. That was it. She had 2 beaded appliques that sat on the shoulders but beyond that the dress was plain cream satin. So I took the bodice apart, took the appliques off the shoulders and cut into the train of the dress to have a piece of satin big enough to put the bodice on and make a design around it. It was a rather odd shape to have to work with but I basically just tried to ignore that part.

Within the beading there were 3 flowers that originally had crystals in the middle that had oxidized and turned black. I took them off. Also within 3 leaves there were beads that were silver lined and had oxidized and turned black. I removed them as well. I could only get so close to the beading for stitching and couldn't outline a thing. It was frustrating. A couple of times I got close enough that my hopping foot hit a bead and it just shattered. So I ended up ending my stitching when I could - sometimes in mid-air. Oh well. Maybe next time I can come up with a better solution to that.

In the areas where I removed the oxidized beads I sewed some of her satin buttons from the back of her dress. So she now has her some of her train, her bodice, her shoulder appliques, and some of her buttons. I'll send it to her in a week and see what she thinks."
Posted by Linenqltr at 9:18 AM

What an heirloom treasure. Absolutely amazing. Love it.

Gorgeous quilt!! What a beautiful reuse for a wedding dress!!