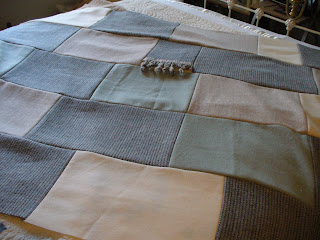 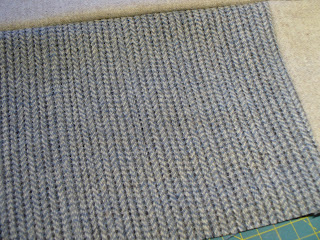 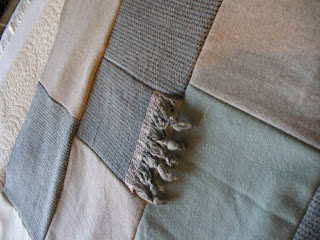 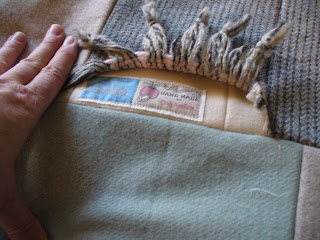 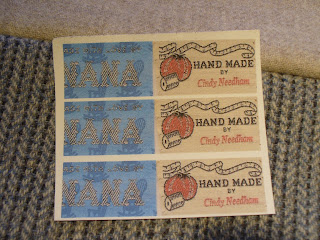 Kent's mother passed away earlier this year after a very long battle with cancer. About a month or so ago Kent's three older sisters and myself gathered at the house to go thru all of Joan's old sewing stuff that had been gathered and collected for many, many years. Oh my. The collection not only contained all of HER stuff but Grandma Needham's (who was a quilter) and Nana's (Joan's mom who was a weaver). I was able to give some beautiful antique sewing notions a new home in my own sewing studio. One treasure in particular was rolled yardage that Nana had woven on the huge loom in her living room. Nobody else was particularly interested in it so I grabbed it along with some other woven yardage.

The yardage is a beautiful Confederate blue with little white chevron's going thru it...gorgeous and it's so soft with a beautiful drape to it. I decided to create four wool patchwork blankets out of this in order to share. I cut the yardage up in big bricks so as not to waste any of it. I combined it with some very nice wool yardage in my stash that's been sitting here forever. I divided everything up into four equal piles so everybody gets a nice lap blanket. At the end of the woven yardage was a great ending with hand-pulled/tied fringe. I cut this into four equal pieces and mounted it on a small square in the middle-ish of the blanket.

When we were dividing things up we came across labels...one was Nana's...one was mine that I used a lifetime ago...and there was another from Grandma Needham. I copied both Nana's and my label onto Printed Treasures fabric...cut each set out...and then sewed them below the hand-pulled fringe. Now the quilts are officially made by both Nana and myself. I found some nice camel colored heavy flannel that I will back these with and plan on going to the yarn store later today to find something beautiful to tie them together with.

It won't be a surprise since I've blogged about it, but these will be going to Kent's dad, my two daughters and of course Kent and I for Christmas. My little voice kept insisting that I needed to share with everyone now...before Christmas...just in case you have a similar scenario. These will make an amazing heart-felt gifts.

This is working up beautifully! How spectacular to have yardage woven by her.

they look lovely..just right to wrap up in xx

Very special is so right! Wow! What a treasure you created. . .uh, four treasures you created! Please let us know what the receivers had to say. Thanks!

Those are so beautiful and make with so much love! Congrats and enjoy them!

What treasures! Isn't this truly what quilting is about to most of us, love and sharing?
~Jillian in North Dakota