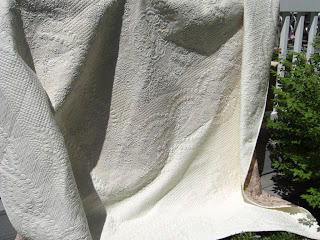 I have featured Karen Azevedo on my blog many times...we met through my blog posts and have since become very good friends. She is an obsessed linen wholecloth quilter and does all of her quilting on a longarm and it just takes my breath away. Last year she was kind enough to let me stay with her during a teaching engagement and I gifted her a beautiful linen as a thank you. She sent me pictures today of the finished product and I asked her to share her story with all of you. Thank you Karen...AMAZING WORK!!! Hugs, Cindy 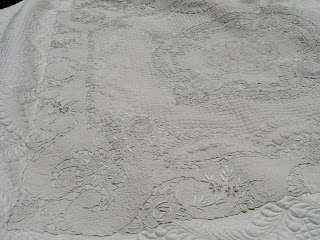 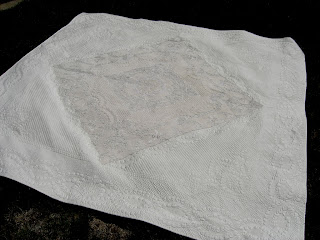 The center linen was a gift that Cindy gave to me. I placed it on an extra wide piece of cream sateen that I had in my stash. I had always intended on using the sateen as a wholecloth for my bed. I had read once that it was good luck to start a new quilting project on January 1. I'm sure some quilter just made it up along the way in order to be able to spend New Year's Day quilting. But, never being one to test my luck, I started this on January 1 by pinning on the linen. The center of the linen was blank - no embroidery, no design. So I added a vintage doily that I had in my collection to add more interest. Once it was pinned, it was a matter of deciding what to do where, what to mark. In some areas I just drew a blank and figured I'd just "wing it" when it came to the quilting or design. Inspiration sometimes comes late to me and rather than seeing the whole quilt at one time and getting things all muddled in my head, I find it's better if I just load it on the longarm and see a smaller portion of it as I get to it. It's at those times that the light comes on and I figure it out. I try not to let the entire quilt overwhelm me which it can do just due to the size alone. Since the linen was from Cindy I really wanted to make it special and I wanted to quilt it "Cindy-style". So keeping that in mind I just kept quilting. But then it's queen-sized so I had to use some self control otherwise it would have been too heavy and stiff. I kept my cross-hatching to a half inch apart rather than go smaller and put a fill in areas that I thought would help to show off the linen as I wanted it to be the showcase of the quilt. When I wanted to add beads, as "Cindy-style" always includes beading, I knew that the daisy-like flowers would be a good area to start. One pearl in each petal or 96 beads. I also added a few of the same size pearls in the center of the quilt to balance it. Next step was the cross-hatching around the middle of the quilt within the linen area. Now I really had to ask myself if I wanted to tackle that area. I used a #11 Delica seed bead in a cream and started stitching them on. I didn't count the number of intersections but at the time I purchased the beads I was told there were approximately 1100 in a tube. I used all but about 20. I didn't knot each one so if one breaks about 20 might come with it. But that's easy peasy to fix once you've already stitched on 1100. What's 10-20 more? I hope I've made Cindy proud! She is my inspiration.
Posted by Linenqltr at 6:47 PM

Karen has created a masterpiece! This is magnificent! I'm stunned! And you must be so proud, since she was so inspired by you! It's wonderful in every way!

This is a beautiful piece of work. Gorgeous!!!

Karen is a remarkable quilters. She is so detailed oriented that her work becomes breathtaking. Plus she is so humble about what she creates. Thanks for showcasing her impeccable designs and talent.

Thank you ladies! Cindy is definitely inspiring and makes me want to get to a higher level. Cindy's always willing to share knowledge and inspiration.