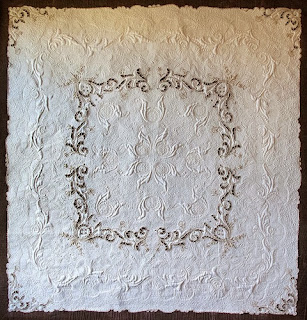 Last August I had the pleasure of teaching my Linen Ladies workshop in Rancho Cordova.  I had a VERY talented group of ladies that attended.   I was particularly blown away by Arleigh as she had a different type of approach for tackling her wholecloth quilt.   She recently sent me photos of her completed quilt and I just KNEW you would be amazed!  Here's her story and thank you Arleigh for sharing with the rest of us!

This summer I was going crazy because there never seemed to be time to sew.  I realize this is because I made other choices, but it was still frustrating.  When I got Cindy's e-mail about the Linen Ladies class in   I jumped at it.  Trying to do something with an antique linen seemed like a new challenge, and it would be DAYS of sewing.

I got on e-Bay and bought a couple of vintage linens (and I should say it is a CRIME how little these things are appreciated in today's world).  They were fairly inexpensive (about the cost of a restaurant meal in an average place).  I went to Kinko's and put the linen on their copier and made some full-scale copies so I could doodle.  Then I spent a couple of evenings playing with designs before the workshop. 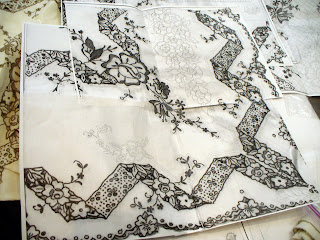 Then it was time to get serious about the design!  I spent almost another whole day getting the design the way I thought I wanted.   I decided to echo the design already embroidered on the tablecloth with quilting, so I took one of the copies and cut it up to make a shape to trace.  I tried several different arrangements before settling on one. 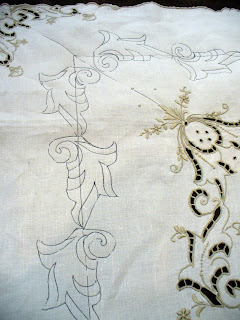 A lot of people in the class used stencils, but I have problems with visualizing and the scale of the stencils, so it worked better for me to design something.  I had taken Cindy's design workshop in 2012, which gave me the confidence to try my own design. Then there was a long process of marking the top.  It was wonderful seeing everyone's designs come together in the class.  Finally, it was time to start sewing. 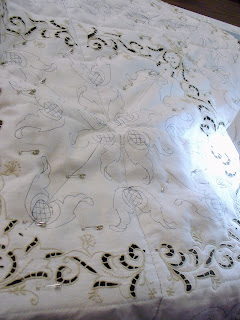 Cindy showed us how to layer and baste the quilt using Superior Threads' Vanish Lite thread.  I hadn't used this product before, and it worked really well.   I used the new Superior Magnifico thread for the primary designs and the Kimono Silk 100-wt silk for the background fill. 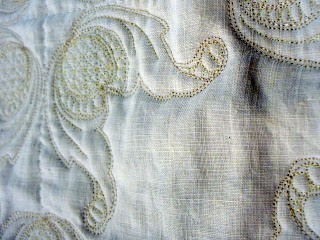 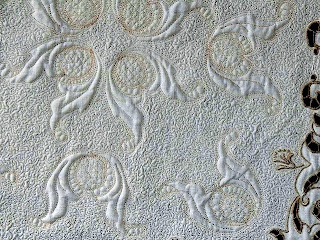 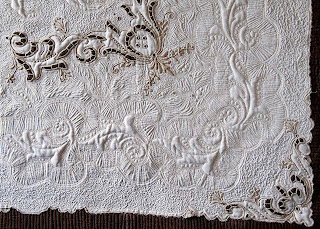 The quilting went well, and I am happy with the result.  Someday the beads may even get attached.  The linen class was really fun - there was lots of sewing, and the class was full of very nice people with an obsession for quilting (my kind of people!).


PS...note from Cindy....There are still a few openings left in next May's Linen Ladies Workshop!   :)
Posted by Linenqltr at 7:41 PM

Way to go, Arleigh! That is fantastic! Kathleen

Wow!!! That is STUNNING!!!
I would LOVE to do one of your classes Cindy.

What a great idea to photocopy the linen piece, and then try out ideas for the quilting of it! Awesome! And what a gorgeous piece! Well done, Arleigh!