When I went to Dubai a few weeks ago a dear friend gifted me with some extra dollars to spend on something special for myself from there...a special souvenir of sorts.  Unfortunately I wasn't able to find anything unique to that area (at least what I could afford), and came home empty handed.  I decided I needed to find something special that I would normally not buy for myself and deem this my "Dubai Souvenir".

I went shopping on Ebay and found THE most amazing linen ever...a find of a lifetime.  I knew this would be my special piece for myself.  I won it with a winning bid that matched my spending money. 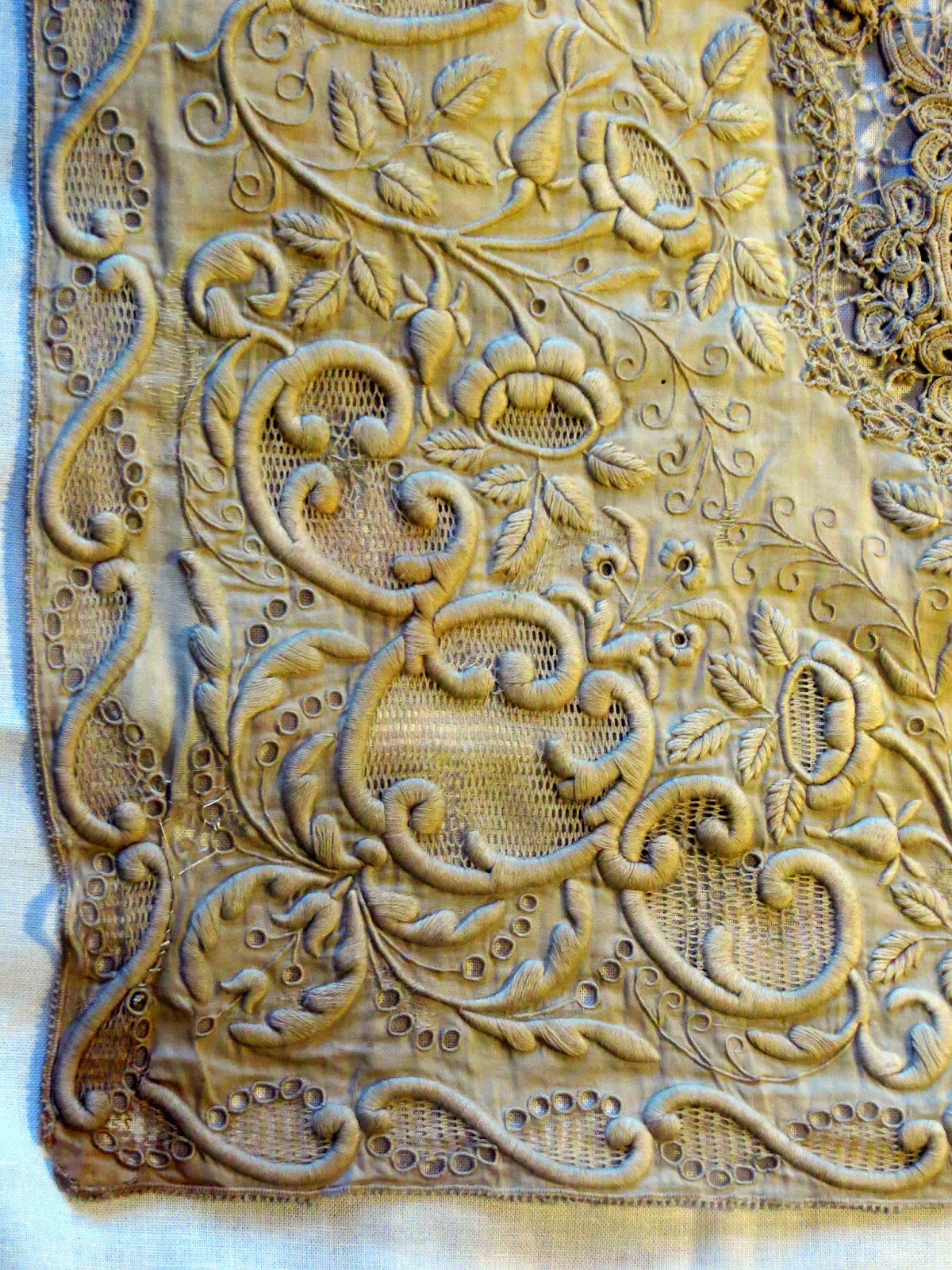 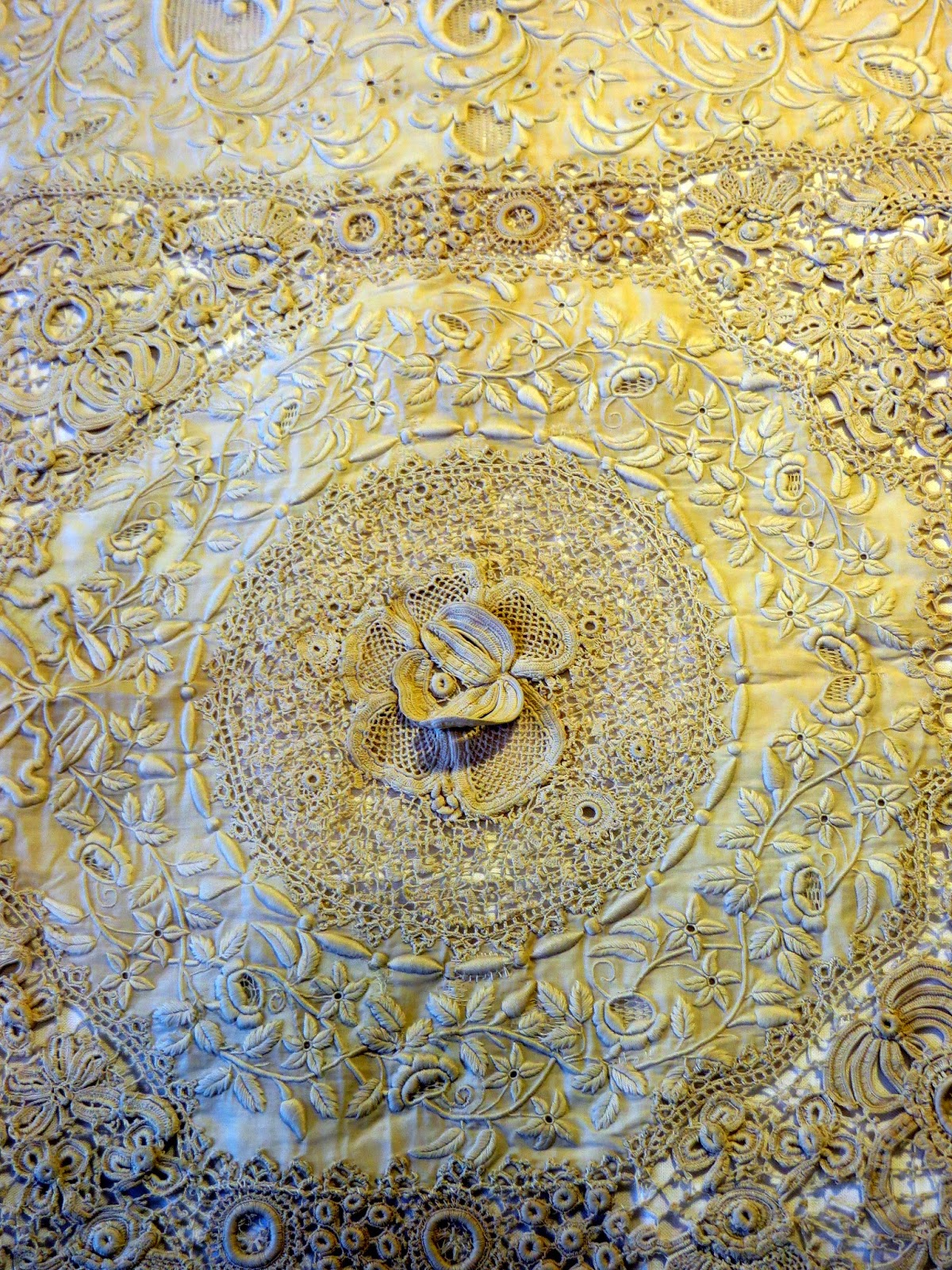 The picture on Ebay had to have been doctored up quite a bit as it appeared pristine white in the photo.  When it arrived on my doorstep it was a nasty rusty brown and more damaged than what I had anticipated. No worries...I've dealt with worse!

With something this delicate and this damaged I was very concerned about washing it as I was afraid it would disintegrate during the soaking but I was unable to use it as it was.  So I held my breath and soaked it overnight with Retroclean. 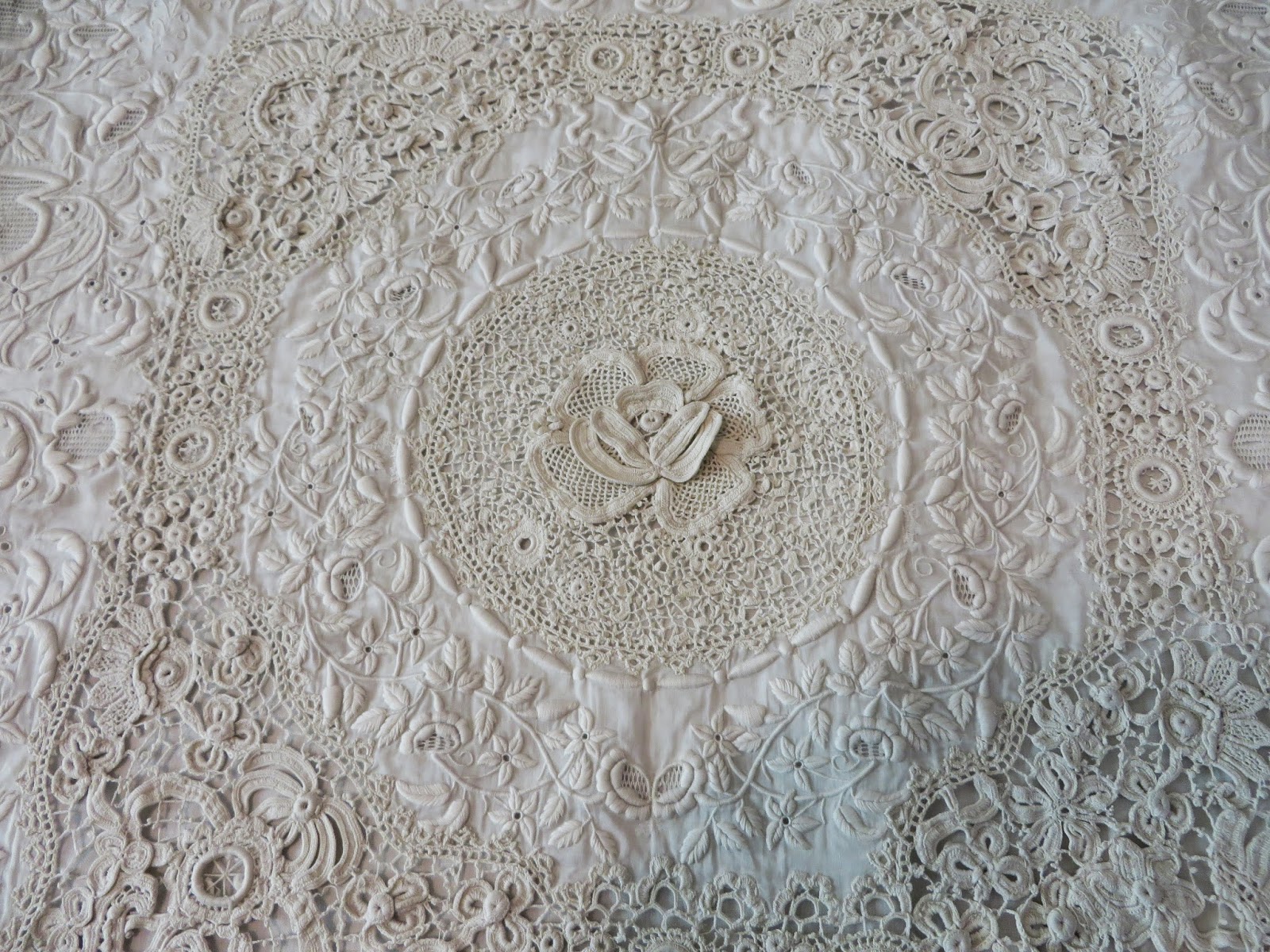 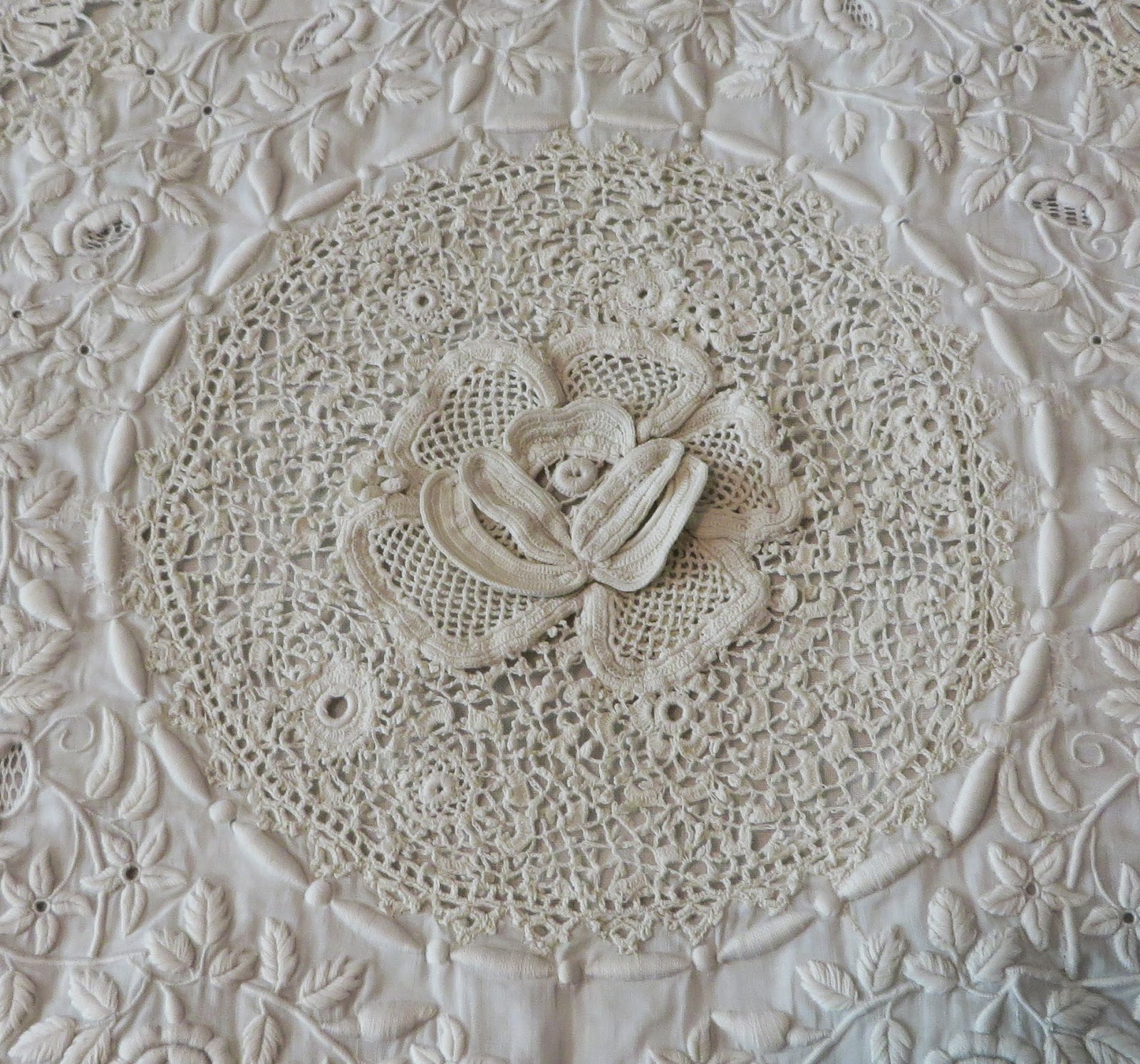 Wha La!!!  It came out absolutely beautiful and white.  I was extremely careful during the hand rinsing and drying...I barely held it and then it let it air dry on a towel for a full day before touching it again.

This piece has the most exquisite white padded work, embroidery and Irish crochet I have ever seen.  It is drop dead gorgeous. I contacted the seller to see if she had any further information or history on it and she didn't.  She did say, though, she thought she had purchased it from a large estate sale maybe 20 years ago and she had a "banana box" full of linens that she is selling bit by bit.  It is probably the fact that this piece has been stored in a cardboard box that resulted in the discoloration and damage. 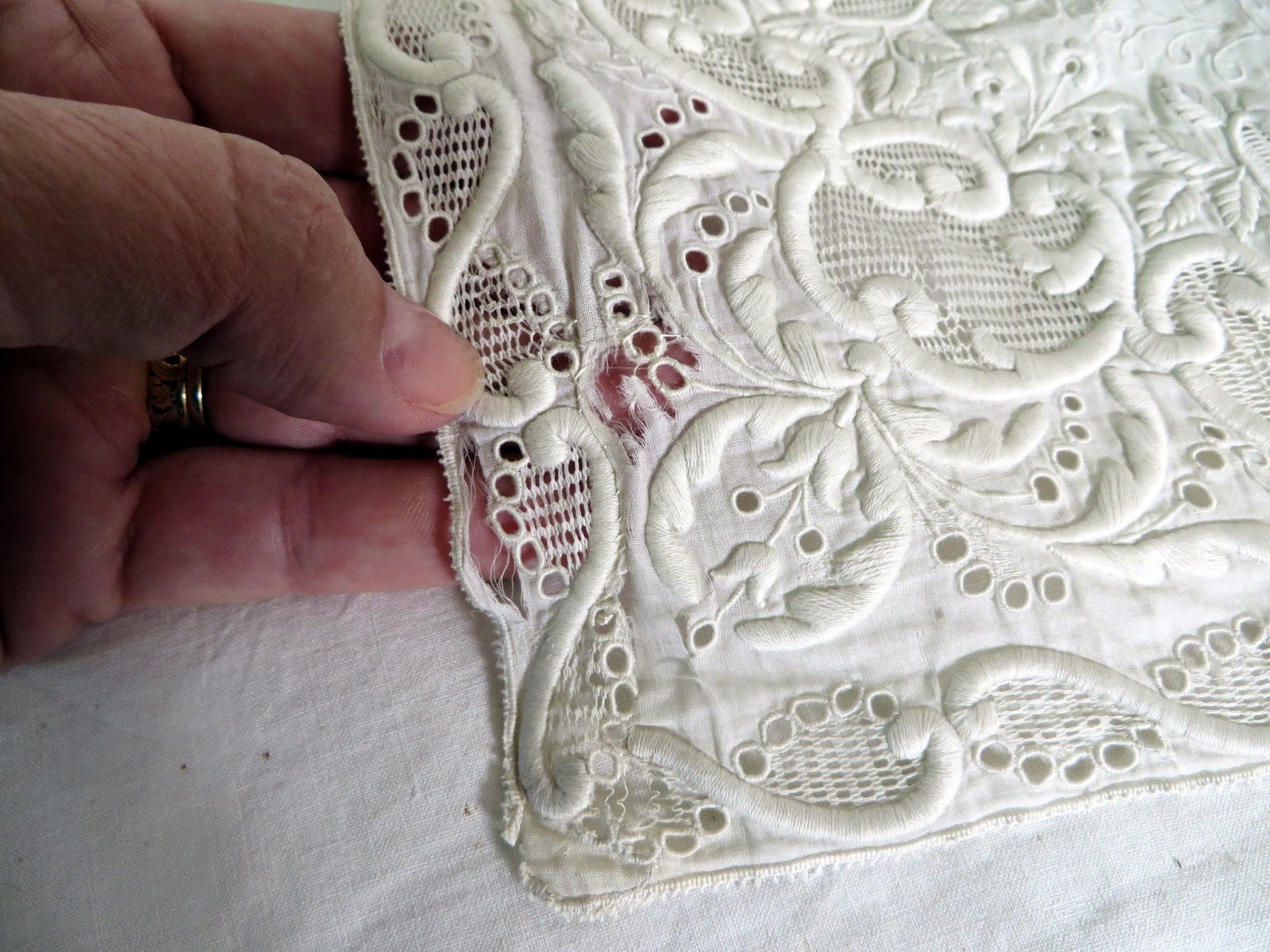 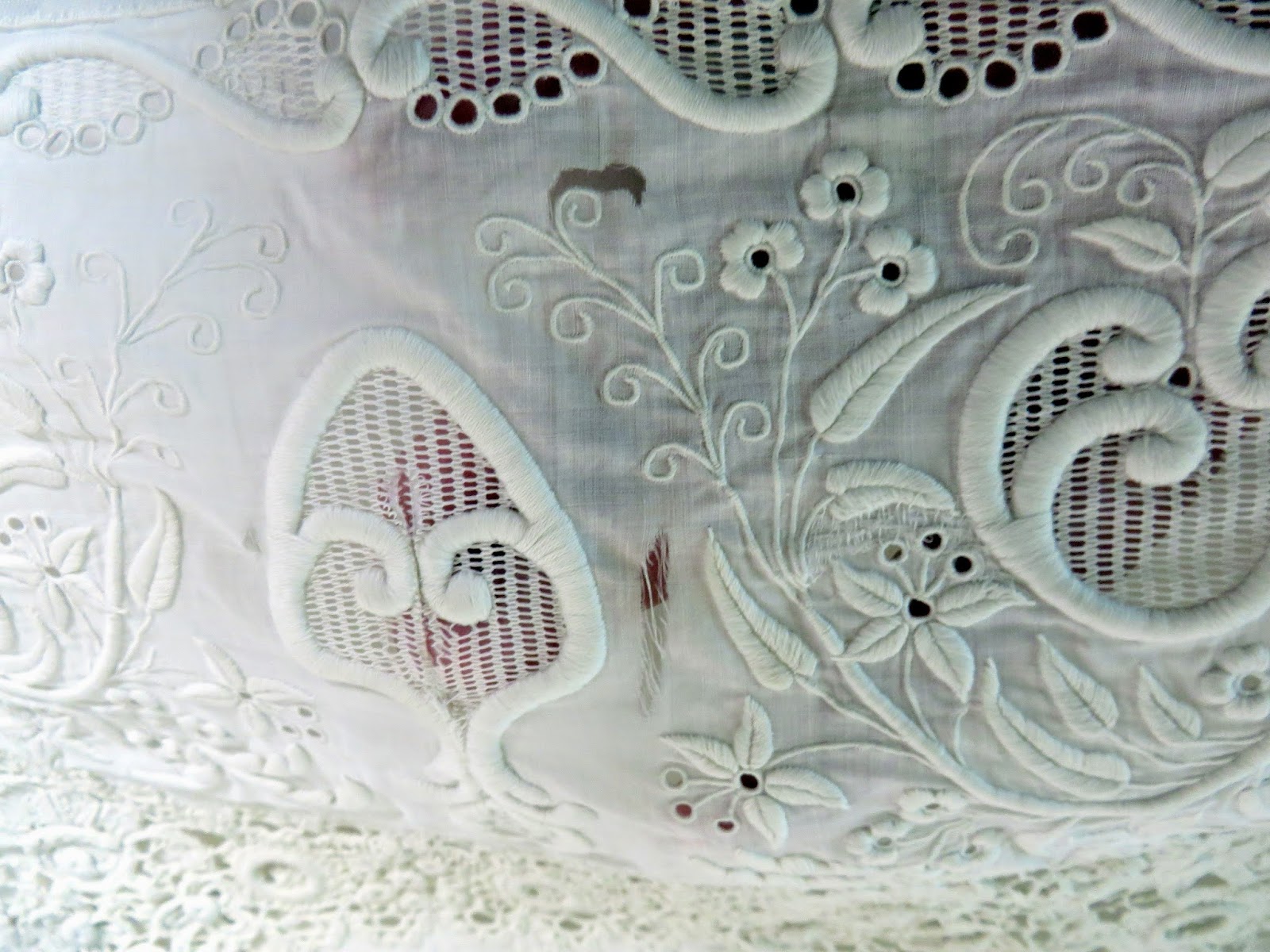 It would be very easy for a "normal person" to just give this up and toss it due to the fact that it isn't perfect.  I'm thankful to not be a normal person!  I would rather have this piece die as a beautiful quilt than be tossed as an imperfect linen. 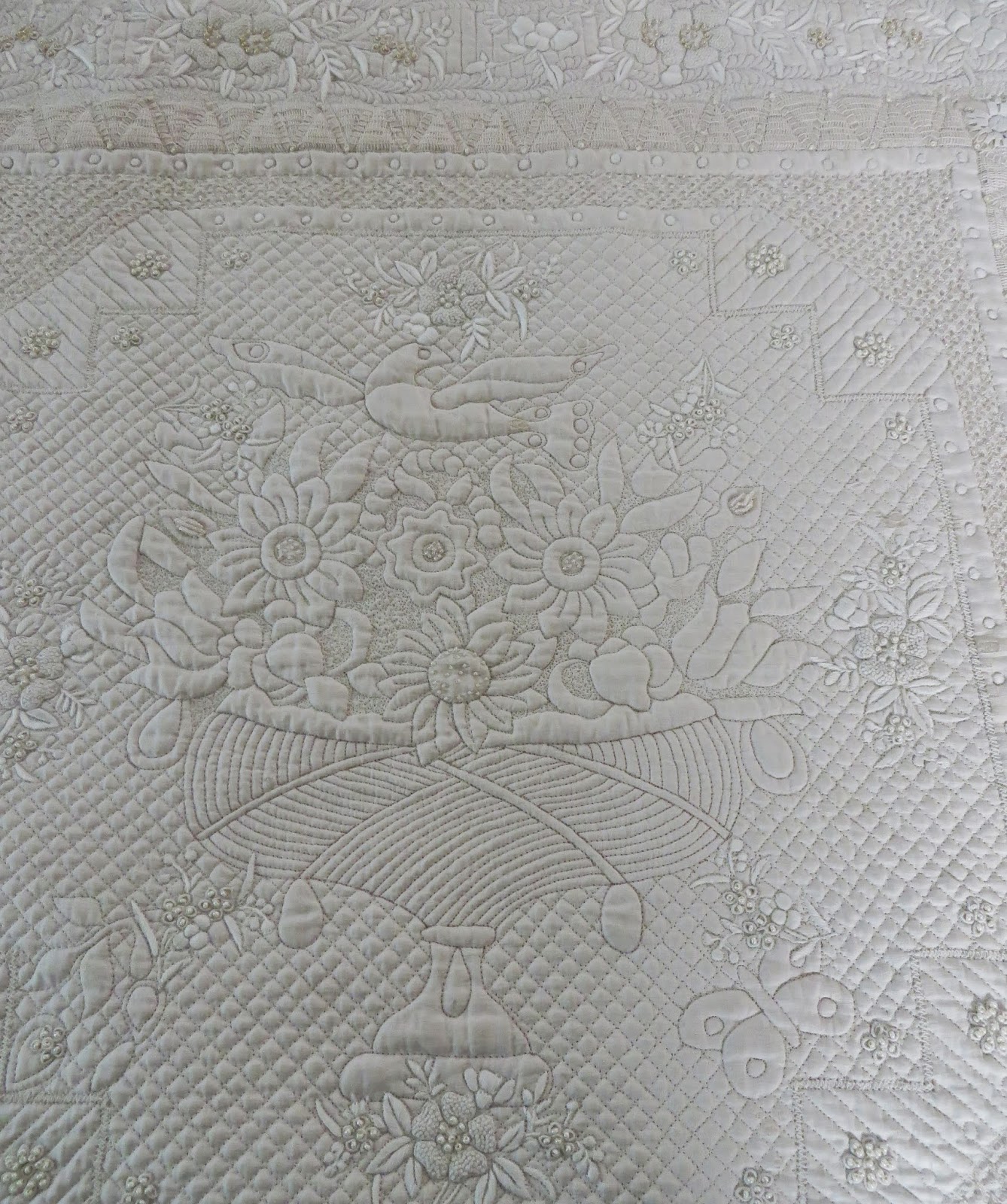 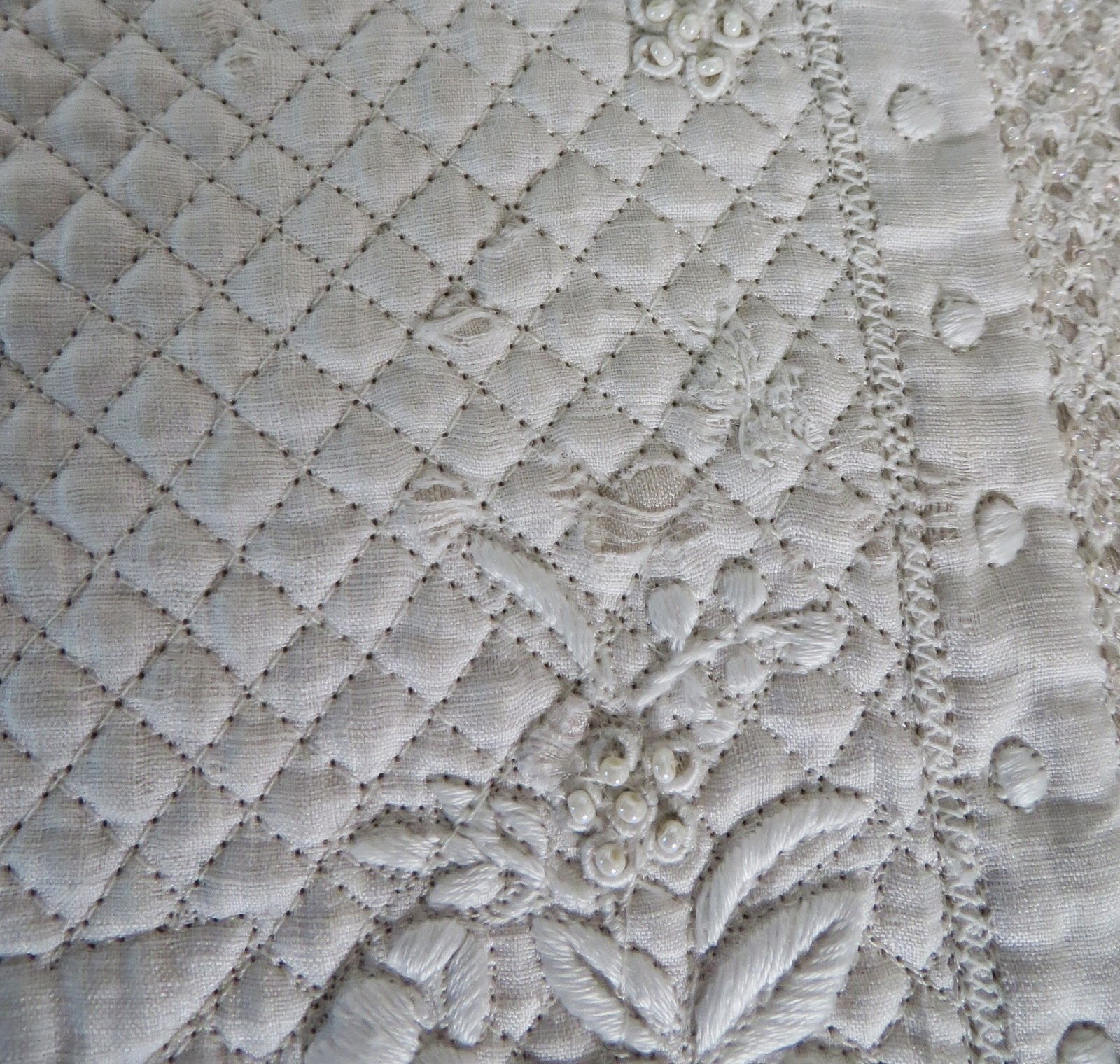 Many years ago I purchased another linen off of Ebay that was also badly damaged.  It had several tears and holes and the whole outer edge had been chewed by mice.  I placed this damaged piece on top of a piece of cream colored Dupioni Silk and quilted it to death. 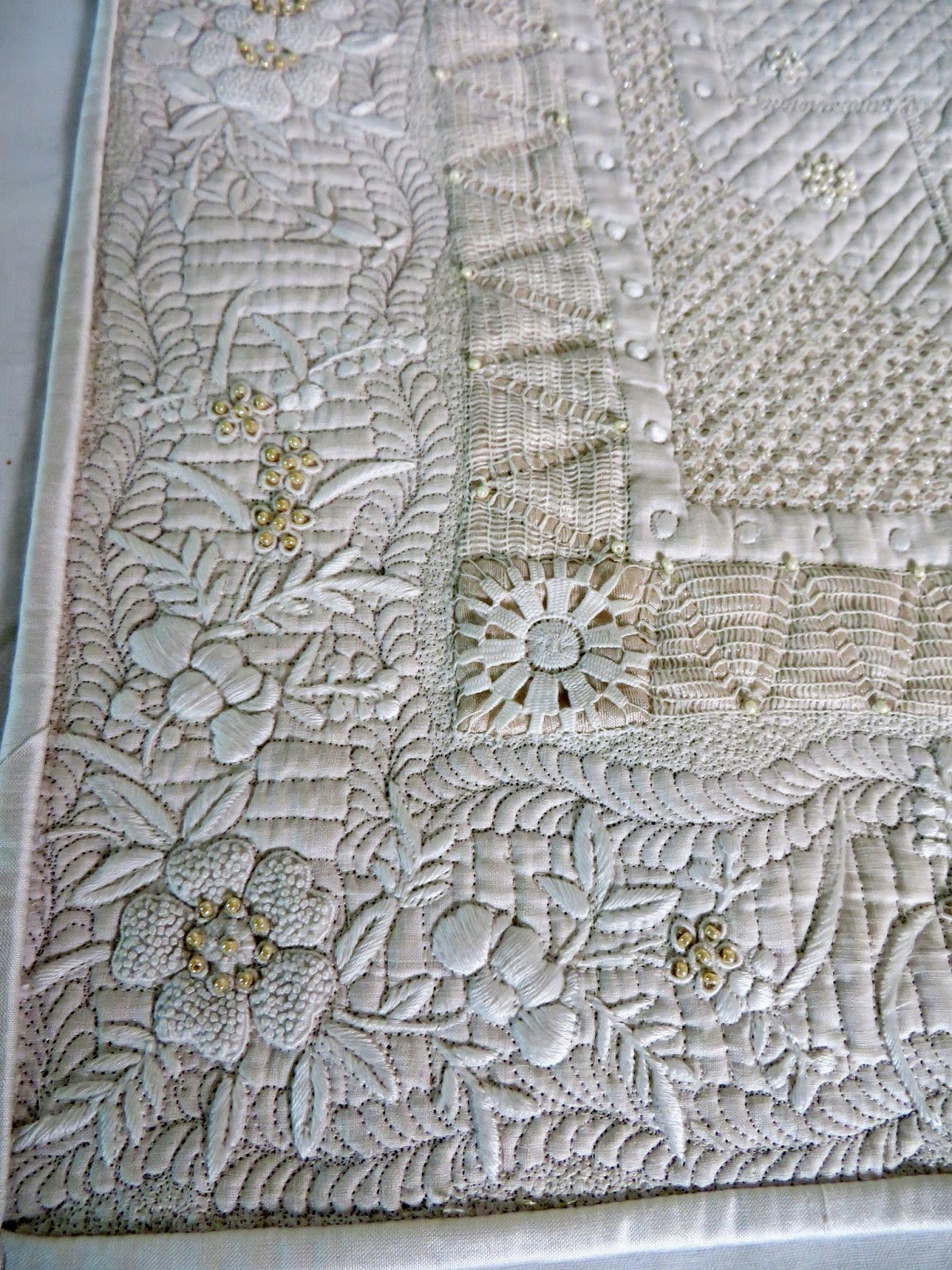 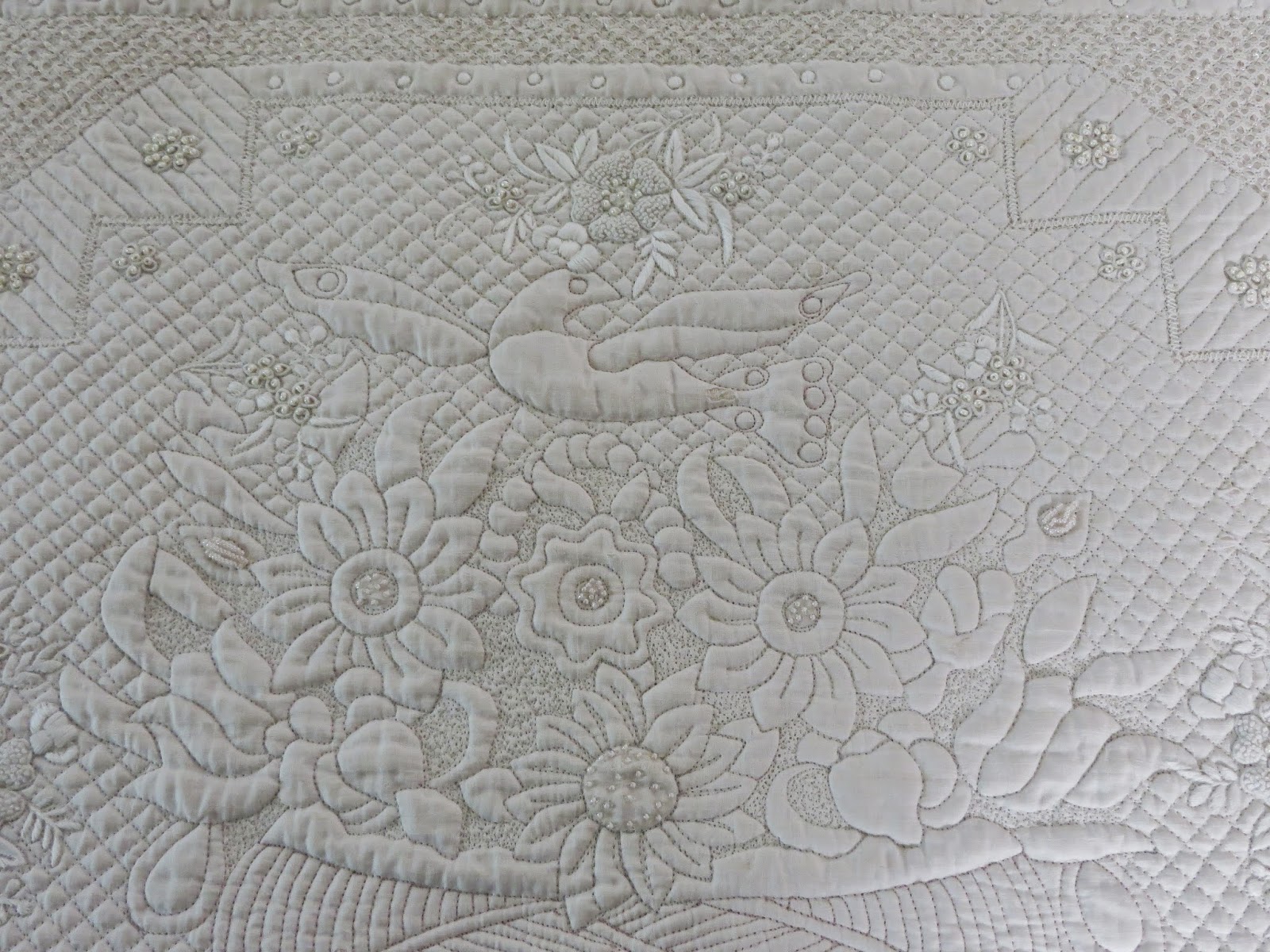 Yes, the damage is still there but hardly visible and this piece, too, will die as a beautiful quilt.  I don't travel with this particular one very often as I'm trying to hang on to it as long as I can. 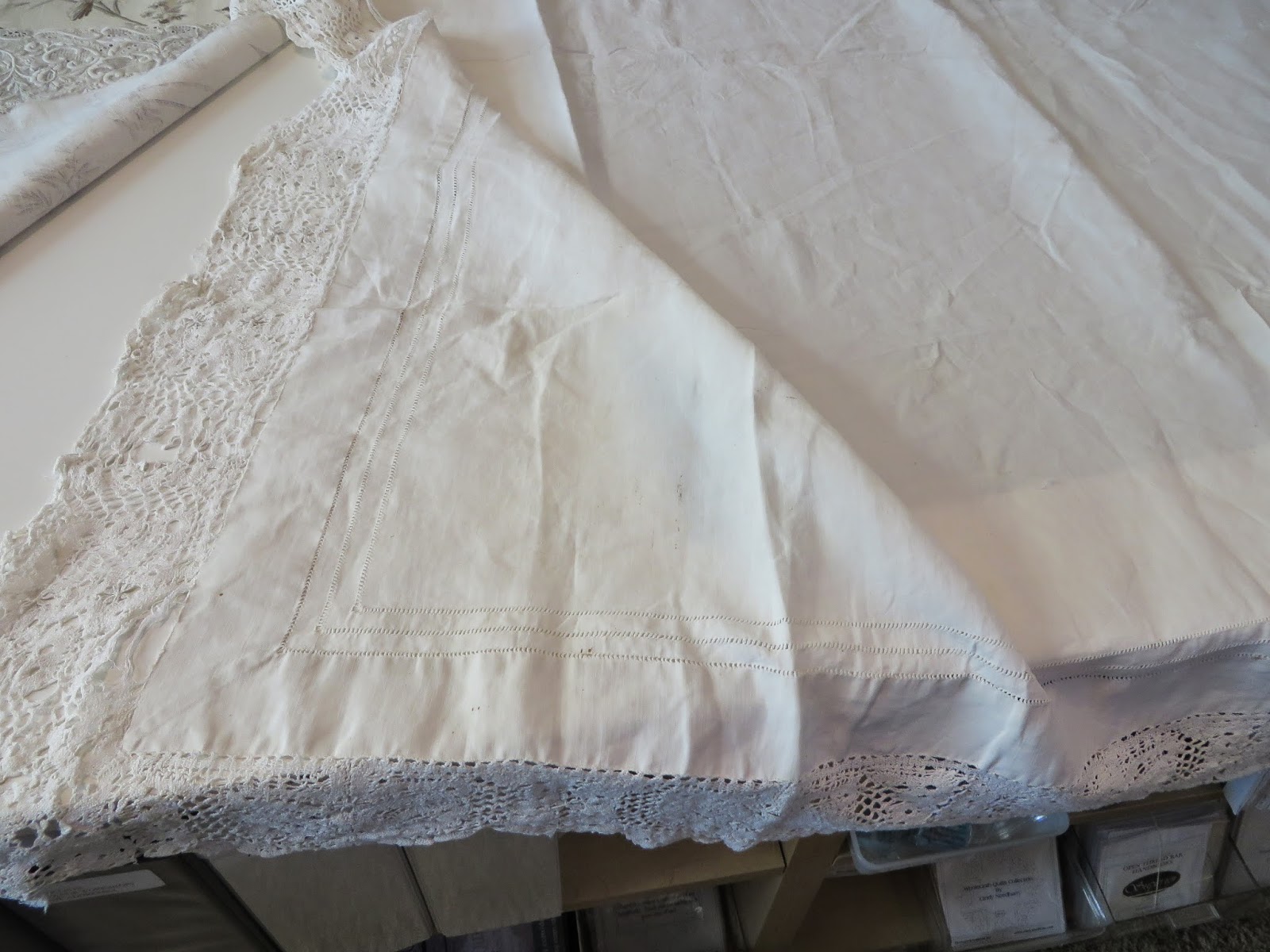 Obviously the Irish linen will have to be placed on top of an underlayment and I couldn't find anything "new" that looked nice underneath...it had to be something old that had a matching patina.  I had a badly damaged linen that was donated to me and it was a perfect match.  I didn't mind cutting it up as I couldn't use it for a quilt...it was much more valuable to me as an underlayment for my new treasure. 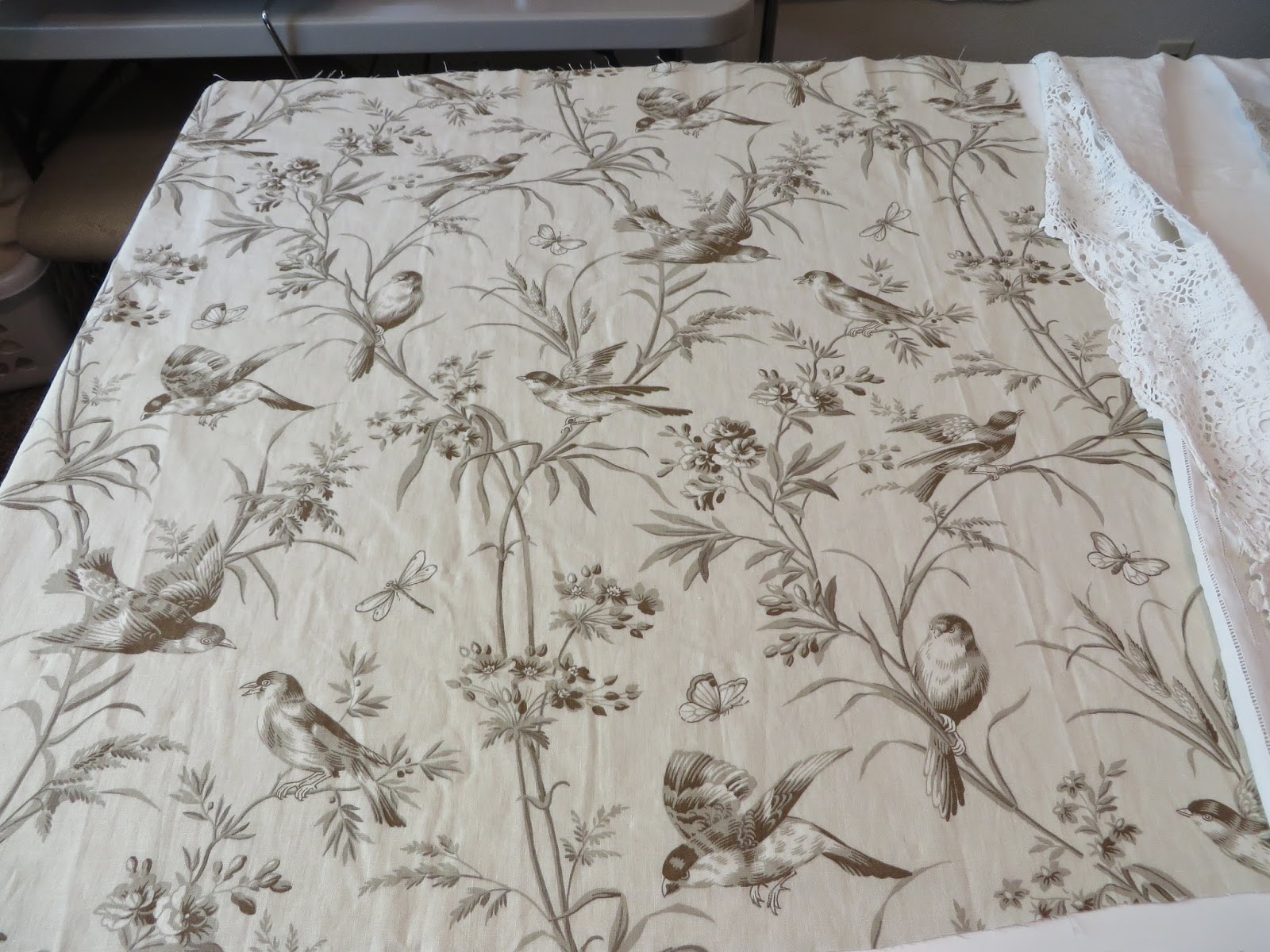 I also had just the right piece of a beautiful French General fabric for the back.

I managed to finish the quilting on my "Provence" piece this afternoon and will post photos in a future blog. I wanted to get it done before leaving for Paducah...another long flight that will be perfect to get the beadwork done!

Thank you, Darlene, for my beautiful Dubai souvenir.  Hugs, Cindy :)

Posted by Linenqltr at 4:11 PM

What wonderful treasures Cindy! have fun quilting! I just LOVE your work!

I'm glad you are not a normal personal either. Although I tend to think of you as an Angel on Earth. I'm glad you ended up with this piece. Amazing what a great job Retroclean did! And I look forward to seeing what you create with it. I'm sure it will be rejuvenated and a piece of stunning art.

Cindy, what a great job. Thank you for all of the inspiration.